Mr K (that’s what I call Ian, my husband) suggested we catch up with Glastonbury this weekend.

We snuggled down on the sofa to watch, smug in the knowledge that we could at least fast forward when the boring bits were on. The first assault on my ageing eyes was the sight of Jo Whiley looking absolutely gorgeous.  Jo stood there (something I can’t do for long what with this dodgy hip ‘n’ all) in a silver shimmery number looking bloody fantastic. It was sickening.  Then she had the nerve to show us a montage of the past 20 years of Glasto in which she seemed to feature in every other frame, clearly demonstrating that she HASN’T AGED A BIT! Cheers Jo. I managed to swallow down the bitter taste of jealousy with a large gulp of prosecco.

The second offence on the old peepers were the Foo Fighters. They burst on to the screen before I had a chance to press the remote control to stop them. In fairness, it had been a long day, we’d been out to a Garden Party (yeah, I know – very rock and roll), and as I hadn’t been driving I’d settled in to do some serious wine drinking.

What about Slimming World I hear you gasp! ( see Countdown to 60 to catch up with SW). I’m doing well and I was having a day off – okay?

Anyhoo, back to the FFs. As I said, it had been a long day with various varieties of grape slipping down my gullet and I was probably just tired but I fell asleep.  Mr K promptly posted said news on FaceFuzz. It drew a few reactions, most them pretty positive and I don’t really care about the ones that said I should be strung up and hung out to dry (which given the alcohol circulating made sense). I prefer the Chilli Peppers anyway… 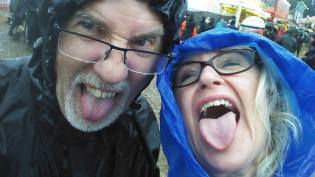 This all led to Mr K and I reminiscing about Download, or ‘Drownload’, as us aficionados call it. Before you ask, we only went the once but it did lead to months of me boasting, “Of course, when I was at Download” and showing everyone our photos that I’m sure drew a few glances of admiration. Or maybe derision. Whatever.

We went because I’d wanted to see Black Sabbath. It was billed as being part of their last UK tour and I wanted to see them to relive my youth and pretend that I was 15 again and listening to them in our school’s Progressive Music Club. Me and my friend joined PMC primarily because there were tons of boys there. But it also introduced me to groups like Pink Floyd, Yes, Emerson, Lake and Palmer and others. As a little girl I’d grown up with The Beatles, Rolling Stones, Cream, The Kinks, et al because my brothers were into those bands, so it was actually good to hear other genres (as well as covertly watching my hunk of the moment from underneath heavily mascared eyes). Black Sabbath aren’t of course progressive rock, but just occasionally we’d all rebel and slip back into old ways.

So, last year Ian and I drove off to Donington Park suitably attired in black. After parking the car several miles away we made our way over to the arena. The first big blow was that I wasn’t given a wrist band.  I was gutted. I’d seen my sons come home with these on and then proceed to leave them on their wrists until they rotted away. I wanted to do the same – although to be fair, working in a hospital where you have to work ‘bare below the elbows’ would have made it tricky. Nonetheless I was not happy and told the nice man that. He’d seen it all – some wrinkly moaning wasn’t about to faze him. He patiently (and slowly) explained that as we were only there for one day (did I imagine that look of contempt?) we didn’t get one. Mr K hurried me through full of placatory murmurings but I’m sure he was also smirking at my rookie error.

The day was suitably wet. I was overjoyed to see the mud, which meant I was a REAL Downloader, but I did resist doing any mud slides. The hip wouldn’t have allowed it. The hip also meant that I was heavily medicated on cocodamol which seemed appropriate for a festival.

We joined the queues for beer (second big blow – the prices!) and sheltered under a gazebo where Mr K was asked if he was Eric Clapton (hah! I wish!). And still it rained. I grimly clung on to the mantra that I was being, ‘real, man’ but there’s only so much rain a person can take. But then the clouds parted and the sun peeped out to cheer us (me) up. And as darkness settled we moved down the main stage to await Ozzy.

I was curious about Ozzy. I couldn’t see how someone who can’t usually string a sentence together when he’s interviewed on television could possibly pull off a whole set. I steeled myself for the disappointment that he would just about be able to remain upright and that would be it. Everyone told me I was wrong and that he would be excellent. Everyone was right. He was more than excellent – he was plain f**king awesome! I loved, loved watching Sabbath. The years peeled away and the hip (helped by the copious amounts of painkillers and booze) felt young again.

It was a brilliant end to a brilliant day and when it was all over we made our way back up the muddy rivulets on the slope to the car park, miles away, to then spend a further hour and a half waiting to get out of said car park, where I reflected that head banging is something you never forget how to do.

We arrived home in the early hours of Sunday and although tired, I was pleased that both the hip and the feet had held up. I felt full of confidence that this old bird still had a bit of mileage left in her and was able get ‘down with the kids’ (yes, I totally appreciate that the very act of writing that means I can’t).

We didn’t go to Download this year (but maybe when I have my new hip we might) but we did catch up with some of the acts on TV yesterday. I enjoyed Sabaton, Opeth and Prophets of Rage, and of course the oldies, Aerosmith and Mastodon, belted out some good tunes. But I also know there are some excellent up-and-coming bands out there, so I will shamelessly plug the band my son, Tim, is in: Sister Shotgun. Check them out – they are good enough for Download. Someone book them! 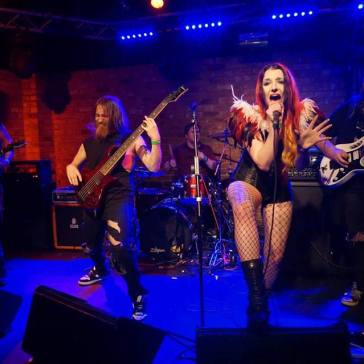 9 thoughts on “Painkillers and paranoia”