This blog post is brought to you via a cocktail of very strong painkillers, so if it doesn’t make sense (well, less sense than my normal ramblings make) I am blaming dihydrocodeine with the odd syringe of oramorph.

As you may remember from Presentations and Patches, my hip replacement was cancelled over a slight disagreement about HRT.

The bonus of this was that I was able to attend the first ever Birmingham International Marathon on behalf of ICP Support. We had three runners; Jamie Hill and Kim Kenny were taking part in the marathon and Katherine Knight was competing in the half-marathon. I’m hoping that I may have persuaded Katherine’s partner to run in a purple pregnancy suit for us next year, but he may have just been smiling at me to keep an old bird happy when I suggested it rather than actually agreeing to do it – I will let you know!

It was a brilliant event supported by a lot of runners and it was also great for us as a charity to have volunteers to help with meeting, greeting and cheering on our runners, as well as helping us to set everything up.  It’s quite an operation getting photos and times of runners back to our Facebook page quickly, and in an ideal world there need to be at least four or five us at these events.

I am therefore very grateful to Alan Eaton, Jenny Hastings, Jude and John Miller-Wilson and Susan and Gerry Urwin who all helped to make the day such a success. My only disappointment was the lack of TV coverage, so I hope next year will be different because Birmingham is a great city!

We also have three runners in the Great South today; Jessica Cannings, Jenny Hastings and Andy Hastings (and big thanks to Simply Gym who sponsored our first set of running vests), so see if you can spot them on Channel Five! 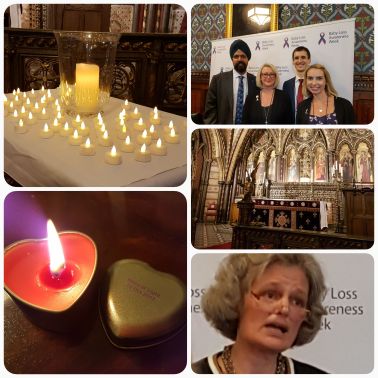 After the Birmingham Marathon I managed to get home in time to light a candle to support the Wave of Light which officially ended Baby Loss Awareness Week.

Earlier in the week I was honoured to be able to attend the Parliamentary launch of Baby Loss Awareness Week, which ended with a beautiful service. Clea Harmer, CEO of Sands, spoke very movingly at the launch and I am sure echoed what so many parents (including me) feel about what needs to be done to ensure that care for bereaved parents in the UK becomes exemplary.  This need isn’t new – it was identified back in the 1990s – and we all hoped that Changing Childbirth would do just that: change bereavement care as well as offering choice, continuity and care for pregnant women. But for various reasons it didn’t happen. Something is different this time though; I can’t put my finger on why, but for the first time in some 20 years I truly believe that things are going to change, thanks to the drive of MPs, such as Antoinette Sandbach, Will Quince, Victoria Prentis and Sharon Hodgson, and other baby charities, big and small, who also want to make it happen.  As someone who was prodded in the stomach by a consultant (who I’d paid privately to see) just a few months after my daughter died and who asked me what I was going to do about my baby tummy, I can’t wait for the change to take place. 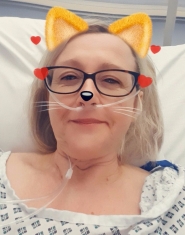 The day after the marathon I had my hip replacement. It went well. I had a blip the following day when they tried to get me up: the pain was so bad that I couldn’t do it. Cue tears and hysterics (seriously, those physios need to get a grip – I did my best but they were distraught!). The next day I bounced back and was up and at ’em so well that they kicked me out in the  afternoon.

The worst part (aside from itching because of the morphine – see the scratch marks on my leg in collage) has been not being able to sleep on my side. As I can’t sleep on my back either because of L4-5 issues in the spine, propped up is how I slumber. It’s not easy and I can’t tell which is more sore: the area where I have had my op or my bum cheeks. I thought I had enough fat on this arse of mine to cushion any problems but I guess the weight loss means I am more bony than I thought I was, so I’m a bit like The Princess and the Pea at the moment.

And talking of weight loss – I didn’t realise that the titanium hip weighs more than my bone, so this week I have put on 1.5 lb (and no booze since last Sunday!) although in fairness it’s hard balancing on a set of scales when you’re only three days post-op. But I now have to try explaining this to Slimming World online, which isn’t quite as straightforward (in fact it’s impossible) as telling your Club Leader. Oh well. I’ll suck it up and see what next week brings.

So I am officially signed off from work for six weeks, but will be doing what I can from home. I will be resting too – it will all be about balance (which I didn’t manage on the scales 🤣). But… this has taken me over two hours to write and I am well-pooped. I will give it to Mr K to check and publish and I just hope you can get the gist of what I’ve been writing – my apologies to anyone I should have name checked but missed out!

And the title of the blog? I’m hoping to be shaking these hips like Shakira very soon…